Goiters (or thyroid gland enlargement) were observed 4000 years ago in Egypt, China, Greece, and other countries.

In 1500, Leonardo da Vinci was the first person to recognize and draw the thyroid gland. He drew the thyroid as a globular, bilobate organ, which he described as two glands.

In modern times, the thyroid was first identified in 1656 by the anatomist Thomas Wharton (whose name is also in Wharton’s duct of the submandibular gland). During that same year, Thomas Wharton named the gland the thyroid, meaning shield, as its shape resembled the shields commonly used in Ancient Greece.

At the time of the French Revolution in 1791, Pierre-Joseph Desault from Paris reported the first known published account of the surgical removal of a thyroid goiter.

In 1909, Theodor Kocher from Switzerland won the Nobel Prize in Medicine “for his work on the physiology, pathology and surgery of the thyroid gland” He is commonly referred to as the father of thyroid surgery.

Henry Plummer at the Mayo Clinic introduced the use of iodine before surgery for patients with Graves’ disease and hyperthyroidism in 1923.

George Crile is credited with being the first surgeon to perform radical neck surgeries for tumors of the head and neck, including thyroid cancers.

Further improvements in medical treatment of thyroid disease took place in early 20th century when Edward Kindall from the Mayo Clinic in 1914 on Christmas day developed thyroxin, making the treatment of hypothyroidism simple and safe.

It was not until 1915 when a pathologist in Vienna named Friedrich Schlagenhaufer suggested that an enlarged parathyroid might be the cause of bone disease.

Felix Mandl performed the first parathyroidectomy at the University Surgical Clinic of Vienna in July 1925. Using local anaesthesia, he excised a ‘yellowish-brown almond shaped tumour’ measuring 25×15×12 mm from the left inferior area behind the thyroid gland. The patient was found to have an immediate improvement. Within a few days the blood and urine calcium content was considerably lower and the patient was soon able to walk again.

In 1926 the first parathyroidectomy in the United States was performed by EJ Lewis at the Cook County Hospital in Chicago. 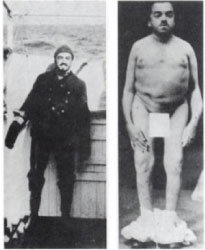 However, the most notable historical case of hyperparathyroidism was that of Captain Charles Martell, a New York City sea captain who had become disabled by demineralization of the skeleton over many years (Fig 1). Between 1926 and 1932 his case graphically illustrated many of the features of the disease and eventually led to its management.The patient underwent a series of six neck operations without success. It was Martell himself, who having researched extensively at the Harvard medical library about ectopic parathyroid disease, suggested to his surgeons that he undergo an open heart surgery where he anticipated the tumor would be located. The patient convinced his surgeons to perform one final operation and in 1932, the 3cm parathyroid tumor in the mediastinum (the center of the chest cavity next to the heart) was removed curing the Captain’s hypercalcaemia and becoming the first successful parathyroid surgery in the United States.

No results found for