Dr. Sabra is a Board Certified General Surgeon focusing on ENDOCRINE SURGERY since completing his training in Dallas in the year 2000. After finishing his training he went on active duty in the United States Navy and completed four overseas tours while supporting Operation Enduring Freedom. During this time he became a decorated Naval officer and advanced to the rank of Lieutenant Commander.

Dr. Sabra moved to Austin, TX in 2003 to start his clinical practice where he joined a team of surgeons delivering the highest level of acute care surgery in the region. With a passion for endocrine surgery he began focusing his practice toward thyroid and parathyroid diseases. As an Assistant Professor at the University of Texas Dell Medical School, and along with his endocrinology colleagues, he started the monthly multidisciplinary Endocrine Conference to discuss interesting cases and educate medical students and surgery residents. He continues to work closely with the medical school and promote surgical education in his role as the Educational Experience Director for Endocrine Surgery.

More recently Dr. Sabra has decided to focus his career in Endocrine Surgery even further, and together with Dr. Brady they have created Austin Thyroid & Parathyroid Surgeons to bring the highest level of care to thyroid and parathyroid patients. Dr. Sabra completed visiting surgical professorships during Summer 2017 in Hamburg, Germany and Poitiers, France where he worked with some of Europe’s highest-volume and most renowned endocrine surgeons in the birthplace of modern thyroid and parathyroid surgery. His fellowship experience in Europe has allowed him to adopt innovative new techniques and approaches to his practice in thyroid and parathyroid surgery, as well as creating new forums for international collaboration. Dr. Sabra also co-authored valuable research articles from his time spent in Europe further advancing the future treatment of thyroid diseases.

Furthermore, being exposed to the national healthcare systems in Europe which are consistently ranked among the top in the world has brought new perspective in delivering innovative value based care models back in Texas and the United States.

Dr. Sabra was admitted to Brown University’s prestigious medical program directly upon graduating from high school. He completed his Bachelor of Arts degree in 1991 and received his Medical Degree with Honors in 1995. He then moved to Texas where he completed his internship and general surgery residency at the University of Texas Southwestern Dallas and Parkland Memorial Hospital. He is a Fellow of the American College of Surgeons (FACS) and board certified by the American Board of Surgery (ABS). He has been an Associate Examiner with the ABS on two occasions, helping to test and certify other surgeons. He is a active member of the American Association of Endocrine Surgeons (AAES) as well as the International Association of Endocrine Surgeons (IAES). Locally Dr. Sabra is a member of the Texas Medical Association as well as the Travis County Medical Society. 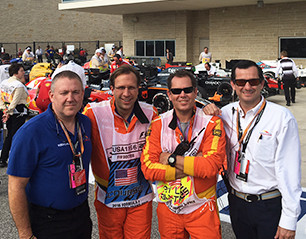 One of Dr. Sabra’s ongoing outside interests is in the area of Motorsports Medicine. He currently serves as the Chief Medical Officer at the Circuit of the Americas in Austin since 2015, and is the United States delegate for the FIA world sanctioning body (Federation Internationale d’Automobile). His work includes the management of the medical care for major racing events at the circuit, including Formula One (F1), the Le Mans Series, and MotoGP. This exciting work also allows international collaboration at medical summit meetings in Geneva, Vienna, and Indianapolis among other places.

Dr. Sabra and his wife, an Ophthalmologist, have called Austin home since 2003. Together they continue to enjoy Austin’s active lifestyle on and off of the lakes, as well quality time spent with extended family and friends.